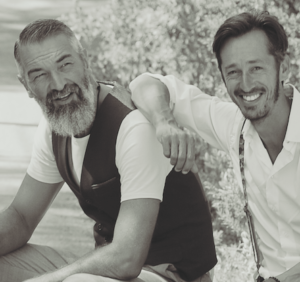 Dutch based producers Sounom & Sagou, began their musical career over two decades ago playing the local clubs and festivals. They are well known for their groovy deep house sessions with a fine mix of tech-house, funk, and a slight touch of techno.

Releasing their first tracks in the year 2009 they instantly established themselves with the classic tune ‘Berlin Ohne Alles’ and a smashing bootleg of the track ‘The XX -Fantasy’. With numerous releases on several labels like Manual Music, Cinematique, Cosmopolitan Flavour, Baroque Records they’ve proven to be a constant factor in modern-day Electronic music.

After playing on festivals in Holland like Dance Valley, Loveland and Sneakerz, they focused on more international stages and for the last few years they are mainly active in Germany and Spain/Ibiza.

In 2013 they were asked to make a contribution to the first promo-release of CafeMambo/Mamboats on Ibiza which led to a partnership & residency in HeavensGate Deep from Woody van Eyden & Neil Moore. The success of the Mamboats-CD asked for a follow-up which came in the summer of 2014. From 2015 the show ‘#LIVEfromIBIZA’ is broadcasted from the Skybar of the famous Ocean Drive Hotel in Eivissa where SOUNOM & Sagou became regular guests from the start and in 2016 they teamed up with Woody van Eyden & Alex M.O.R.P.H. to compile and mix the ‘Feeling Ibiza’ Album Volume 4.

Nowadays these ‘brothers in music’ are playing their music on several channels all around the world!