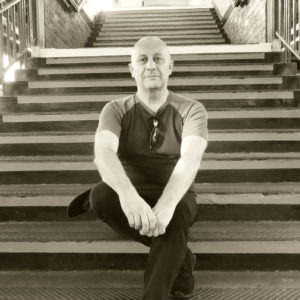 A cosy Parisian apartment, an old piano slightly out of tune, a mother whose nimble fingers fly on the keys to play a sonata by Chopin or Liszt, this is the first memory of JP Lantieri’s childhood and intense music.

As years go by, the love of music is there, but its social environment and the education received do not favour the possibility of an artistic career. The path that is then imposed on him is that of a great school and an engineering degree.

Yet this strict framework will allow JP Lantieri to grow and develop his artistic talents, where so many others would have given up.

His professional activity at the time led him to live in different countries in Asia and the Middle East. It gives him the financial freedom to train in composition, arrangement and musical production. This period opened him to other cultures and influenced his musical beginnings.

His first two albums entitled “Lounge” and “Tempo” are released in 2009. They merge lounge music and world music. The doors of the DJing then open to him. He creates with his friend DJ French Chris, the series of events “French Connection” in Kuala Lumpur and mixes also throughout Asia.

The work pays off and the recognition of the music community is there. In 2012, he was awarded the Gold VIMA Award as Best Electro/Dance Act.

In 2013, JP Lantieri decides to leave Asia. To follow his vocation, sacrifices are sometimes necessary. Its idyllic living environment, sun and beach year-round, gradually becomes a real golden cage and a brake to his evolution. He doesn’t hesitate to make the big leap to the unknown. He sells furniture, apartment and car. The transition is emotionally difficult and leads him straight to the hospital on Christmas Eve.

In 2014, he moves to London. The city is conducive to artistic encounters. She inspires him, electrifies him, increases his creativity and productivity tenfold: “I have to say that London is a very energetic – yet competitive – city, where I’ve met a lot of genuine and incredible talents. All this energy has multiplied my productivity, and has really accelerated my progression”. From this emulation, many tracks and the Flemcy Music Label are born.

Barely a year later, the professional recognition is there, his EP, London Calling wins an Independent Music Award. He also mixes for the famous designer Jimmy Choo on the occasion of Fashion Week in Paris.