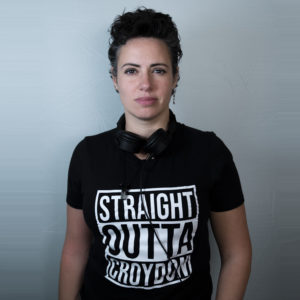 Caz has extensive knowledge of music with a collection organised into 250 genres. This gives her immense flexibility in the music she plays even when focused on one sound. Caz is famous for being able to hype any crowd to the max no matter

what the style. This has made her a resident of the ever-changing faces of Secret Cinema. Many of her sets are interwoven with elements of world music and indigenous sounds and at times accompanied by live keys and vocals.

Caz crosses and blurs boundaries in both her DJing and compositions, introducing fresh concepts and leading her listeners on a journey for mind body and soul. Caz is a philosopher and speaker and runs the thriving group Conscious Explorers, exploring the inner and outer realms of reality. These concepts are regularly found in the music she creates. Her soulful singing style has been described as Imogen Heap meets David Bowie. As well as the more energetic styles that she produces, Caz has a passion for what she describes as progressive beautiful electronica.

Caz Coronel · Music To Get High To – DJ Mix